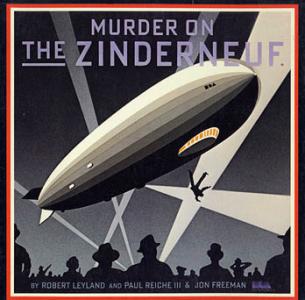 Murder on the Zinderneuf

The year is 1936. You are in flight on the dirigible Zinderneuf and a murder has just been discovered! As the only detective on board the ship, it is your job to discover who the murderer is before landing. The game is played from a top down view of the Zinderneuf. In order to solve the case, you will need to find enough evidence to accuse the correct person. Clues can be found by searching the various rooms, and also from interrogating the fifteen passengers on board. When you come across a passenger, you can question them by being polite, forceful, naive, or whatever approach you think will get you the most information. You can even ignore passengers, but ignoring someone now may make them reluctant to help you later! By piecing the evidence together you need to come up with the killer before time runs out. You may play the game as one of eight different detectives. Each time you play, the killer, his/her motive, and the various clues will be different.