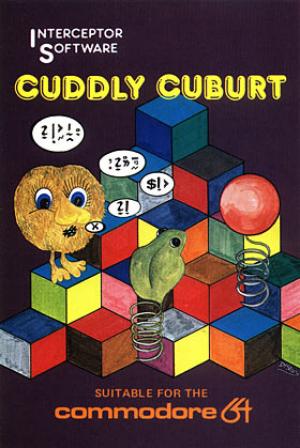 Cuddly Cubert is a single screen isometric viewed game inspired by the arcade game Q*Bert where you have to turn the coloured cubes of a pyramid to a different colour. To change the colour of a cube you must jump on it to change it and when all the cubes are changed then you move to the next level. On later levels you have to jump on a cube more than once to change it. As you jump from cube to cube there are creatures that move around the screen with the main bouncing balls bouncing from the top to the bottom increasing in numbers the further you progress. Snakes and various other creatures also make an appearance and these bounce in various directions around the screen and if you touch any creature then you lose one of five lives but the changed cubes stay changed. If you fall off the pyramid, as well as losing a life all the changed cubes change back. There are two discs on either side of the pyramid and when landed on take you to the top of the pyramid.