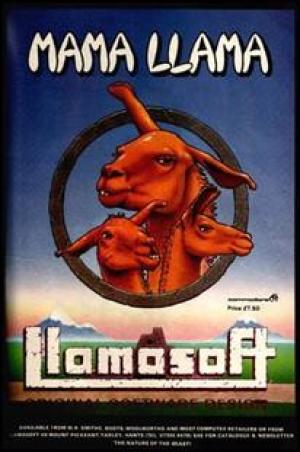 In this game, players need to protect three llamas from being killed by alien invaders. To help them, a "killdroid" moves around the screen, and by holding down the joystick's fire button, players can move it over an invader to destroy it. Any of the three llamas can be killed separately, but the game ends if Mama has been destroyed. Before the start of the game, players are presented with a 10x10 grid of squares, with each square representing one wave. Each square also bears one of five icons, and the color of each square indicates the number of invaders present in each wave. A flashing square is located in the bottom-right of the grid, and this indicates the wave that you will enter. Two pointers are also found outside the grid, and by using these pointers, players can rearrange the rows and columns of this matrix to choose different waves. As the players advance through the waves, the invaders will populate over time, whether or not they are playing that wave. To assist them, they have a limited supply of anti-genesis and retro-genesis devices, which are placed on individual squares and doing this will halt and reverse the population explosion. Players need to quickly do this since they have limited time to place the devices and select a wave. The game is over once time runs out. If there is an excessive wave population, or the player completes a wave, a "nogo" icon appears in that square. If the player happens to move one of these icons inside the flashing square, they are docked a point from their "nogo" rating. If they do this too many times, the current game ends.