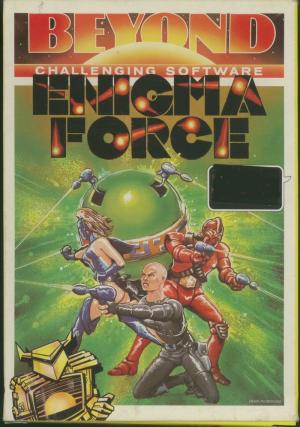 Following the events depicted in Shadowfire, General Zoff, the republican dictator, has been captured, but he still had time to declare war on the empire. While five members of the Enigma team: Zark, Sevrina, Syylk, Maul and yourself; escort Zoff to face the Emperor’s wrath, the war flares across the galaxy. As you cross the imperial border, Zoff concentrates his awesome psionic powers on the Enigma craft’s guidance system. Moments later the ship is bucking and burning through the atmosphere of a planet. You awake, head throbbing, to find the Enigma craft wrecked and General Zoff missing … Gameplay is very similar to its predecessor Shadowfire. Take control of your four Enigma Force members, each with different abilities, and lead them through an underground complex filled with enemy soldiers and lots of puzzles. You will often need to combine the abilities of more the one crew member to solve a single puzzle. The user interface is completely icon-driven. Only character movement and shooting is done directly with joystick. The game is in real time and you often need to switch between the characters because the enemy troops also move to through the complex and attack.