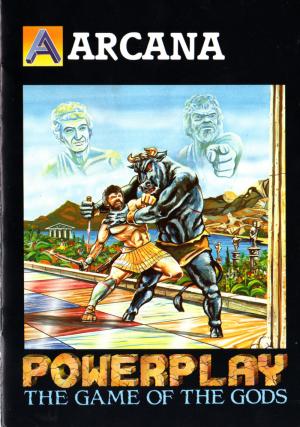 As one of the four great Gods Apollo, Hermes, Hecate and Aphrodite, choose a team of four mighty warriors to fight for you in the Powerplay tournament to prove who is the greatest. This battle will be fought out not using swords or knives, but with knowledge - gameplay takes the form of a complex quiz on a chess-like board. You have four playing pieces, which start off arranged as a cross in one corner of the isometrically-viewed board. The squares are split into four different colours, which each represent a particular broad Trivial Pursuit-style subject area. The question has four possible answers, and a correct answer allows you to move your piece one space, perhaps onto one of the four white teleport squares (which randomly places it on one of those four squares). When a piece lands on the same square as an opposition piece, a challenge ensues, which plays out like a quiz show, with questions asks in quick fire and the first player to answer gaining a point if right and losing one if wrong. The losing piece drops down a skill level. Once a piece reaches 25 Wisdom Points, it can mutate up a skill level - this makes it harder to beat, but makes the questions it faces harder.