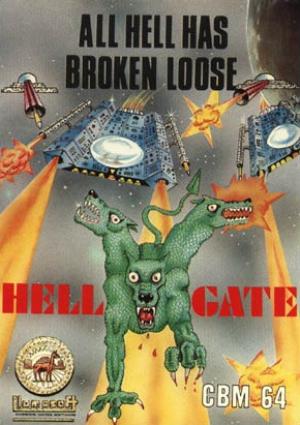 The Zzyaxians want to destroy Earth but don't want to appear near the planet as the chances of success are slim. They have decided that they will Hyper-Space near Pluto and create a surprise attack. Problem for them is that while they are zooming towards our Solar System, we have detected them arriving and where their re-entry point will be. Quickly a Hellgate has been built surrounding the re-entry point and it is up to you to control four laser heads on the walls of the gate and blast anything that appears over 20 levels (the first eight can be selected). When all aliens are destroyed it's onto the next wave of Zzyaxians. Occasionally some goats will appear and run across the gate, if they make it without being killed you get bonus points. The laser heads can only move along the wall and fire inwards across the gate. The four heads are split into two, yellow and purple. You control the yellow heads and when you move one the purple head opposite moves in tandem. Moving your joystick in one direction moves one ship around the walls and moving in another direction moves the other head. The aliens appear in the centre of the gate and move towards the walls, and when they reach it, they move along it until they touch a laser head. Any laser head being touched makes them all explode but destroys anything else in the gate. You lose one of four lives and when you lose them all it is game over.