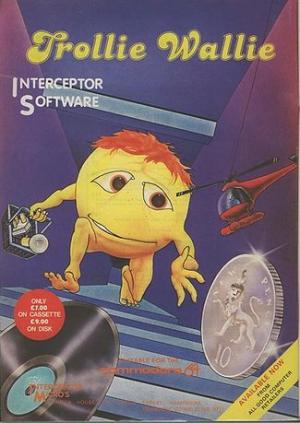 Trollie Wallie is a platform game for the Commodore 64 and Amstrad CPC home computers, written by Andrew Challis and published in 1984 by Interceptor Micros. It is a sequel to the game Wheelin' Wallie. Trollie Wallie takes place inside a huge, labyrinthine supermarket where numerous items are scattered around. It is the job of Wallie, guided by the player, to take every item to the checkout counter. The game is played over one large map, which scrolls in any direction as needed by Wallie's movement. Wallie starts from the lower left corner and the checkout counter is at the lower right corner. Wallie can only carry a maximum of five items at a time, at which point they have to be taken to the checkout counter.[1] Because of this, the player must learn to divide the game play into several trips, whose routes are planned in advance. Forty items must be collected in order to complete the game.[1] The map design and graphics style in Trollie Wallie is very surreal, with ladders, slides and conveyor belts forming a devilish maze, and with nightmarish creatures wandering around inside the supermarket.