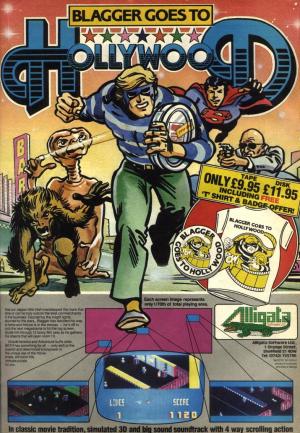 Blagger is back! This time he decided to take a tour of Hollywood, and to the movie sets of Steven Speilbum, in an attempt to steal Speilbum's latest film. Blagger's quest is not easy. Many movie characters such as James Bond, Batman, Superman, Jaws, Tarzan, Robin Hood, and the Incredible Hulk roam the movie set; each character recognizable by its theme tune as you approach them. It is up to Blagger to kill each character using a variety of props that are scattered around the sets. Each prop must be connected with the movie star; any other prop will have no effect. When a star is killed, it will leave behind an object that you can use to kill other characters. Once all the characters have been killed, you can proceed to Speilbum's office where all the characters are resurrected and you must kill them once again.