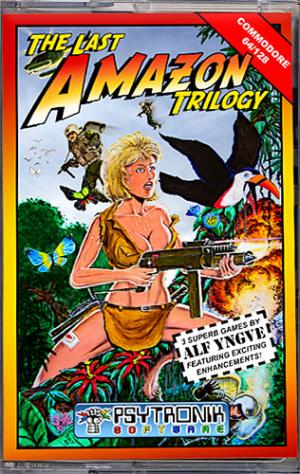 ** THE LAST AMAZON STORY ** In the early 1990s, an energetic young UNICEF worker travelled to the remotest parts of South America’s rain forests. Her job was to carry out a vaccination program among some isolated Indian tribes. She carried with her a rifle, a bulletproof vest, a bag of vaccines and syringes, and a small shortwave radio. She was lost without a sign for five years ... ** LAST AMAZON 2 STORY ** After her ordeal in the Amazon jungle, she left her adopted tribe. She moved to a small desert town in Arizona, USA and found new friends who she came to call family. Finally she had peace in her life... But a South American drug lord, whose drug factory she had destroyed, wanted revenge. He sent an army of mercenaries and hit men to raze the town to the ground and kill her. Now she must defend the town and herself as The Last Amazon ... One last time? ** THE LAST AMAZON TRILOGY FEATURES ** · Three excellent games + bonus intro sequence by Alf Yngve · In-Game enhancements and power-ups by Shaun Coleman · Amazing soundtracks by Richard Bayliss, Tonka & Zaw Productions · Brand new bitmap loading screens designed by Kenz ** THE LAST AMAZON TRILOGY GAME CREDITS ** Concept, stories, artwork, graphics, sfx and game designs by Alf Yngve. In-game enhancements + additional design by Shaun Coleman. Front-end + additional coding by Richard Bayliss. Tape turbo by Martin Piper, mastering by Richard Bayliss. Music by Tonka, Warren Pilkington & Richard Bayliss. Loading screens & packaging by Jason ‘Kenz’ Mackenzie. · Eye-popping artwork by Alf Yngve!