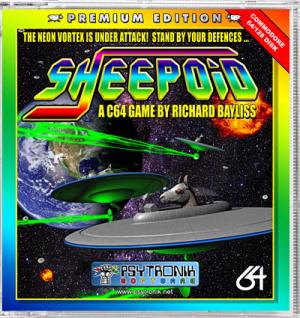 A nightmare has just begun! The Neon Vortex is under attack from strange and bizarre psychedelic experiences from outer space! We have transported two micro sheep to fight against the Neon Vortex invaders. Your sheep are also armed with a deadly SMART BOMB that will destroy everthing on the screen. Use these wisely as your sheep can only carry one smart bomb per level. ou must also rescue baby sheep trapped in the vortex, if you shoot them you will lose 1000 points from your score. Be careful when using the SMART BOMB as this will also destroy any baby sheep on the screen! ** GAME CREDITS ** Programming, gfx + sounds by Richard Bayliss Multi-Screen Construction Kit Library Source by Jon Wells Additional Support by Achim Volkers Cover artwork by Mat Recardo (based on a design by Alf Yngve) Packaging by Jason 'Kenz' Mackenzie ** GAME FEATURES ** Control two Sheepoid units at the same time! SMART BOMB for ultra-destruction! Multi-level action in the Neon Vortex! Save the baby sheepies trapped in the Vortex! Strobo-fx that will MELT YOUR BRAIN* Psychedelic aliens will attack you from OUTER SPACE! Based on LAZER ZONE by Yak the Hairy! * Note: The strobo-fx will not really melt your brain - and you can turn them off if you want!