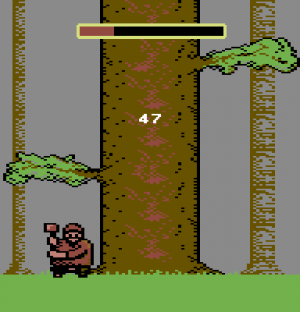 Last year via the CSDb database, the Megastyle, Protovision & Atlantis group released the C64 homebrew game of ' Lumberjack ', which put you in the mighty boots of a Lumberjack chopping down a tree as fast as he can, without being bashed by the big branches above. It was a charming little game with a bit of comedy mixed in which was met with positive comments such as this game is highly addictive. So if you've played it and would rather experience it on the Amiga, now you can, as Cobe and Lemming880 has done a fan made conversion tested on both an A500 and A1200.