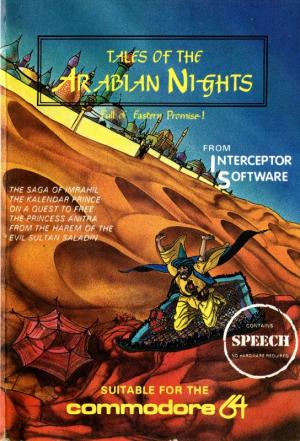 Tales of the Arabian Nights

The Sultan has kidnapped Prince Imrahil's sister to be his wife and taken her to Baghdad. You play as the Prince as you journey over eight levels avoiding various obstacles, guards and nasties before your sister is home and safe. You start on a ship crossing the sea until you are flying a magic carpet to escape from the Sultan. The game is split into two styles of game, a platform game with the whole level shown on one screen and a horizontal scrolling game viewed from the side. The platform sections see you in various locations and you must collect six jugs with the letters to spell the word Arabian which must be collected in the correct order. You can climb ladders and ropes while jumping up to higher platforms. Don't fall too far as this will kill you. The scrolling sections are between the platform levels and the first one sees you on a raft avoiding crocodiles or falling rocks. The other sections you fly on magic carpets avoiding other carpet flyers and nasties.