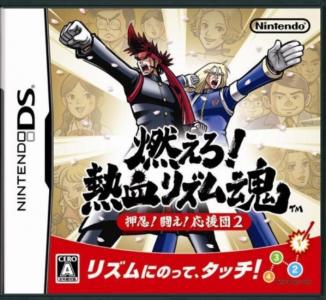 Moero! Nekketsu Rhythm Damashii Osu! Tatakae! Ouendan 2 (which can be translated to "Burn Hot Rhythm Soul Go! Fight! Cheer Squad 2") is the sequel to the DS original, Osu! Tatakae! Ouendan which was released in Japan in 2005. The game follows a group of superhero male Japanese cheerleaders, known as Ouendan, who travel all across Japan (and even outer space) to solve various people's problems through song and dance. The new twist for the second entry in the Japanese series is the presence of rival Ouendan, whom are playable in half of the game's stages.