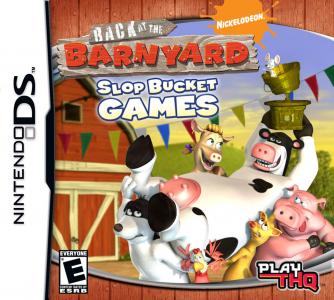 Back at the Barnyard: Slop Bucket Games

Also know as: Back at the Barnyard: Cowlympics

In Back at the Barnyard: Slop Bucket Games, players will be able to play as one of their favorite characters from the TV show and compete in a series of wild and wacky sporting events. In an attempt to become the Slop Bucket champion, players will earn points while performing flips and tricks mid-air in Cowapault, drive a watermelon-filled truck through dirt roads in Melon Race, smack raccoons and coyotes with a hammer in Whack-a-Rac, and pick up sheep in a hot-air balloon in Balloon Shepherd. The game features a farm-themed version of classic arcade style gameplay, in which players will have the ability to freely explore the zany Barnyard world like never before, customize their characters and personalize their very own game arena.