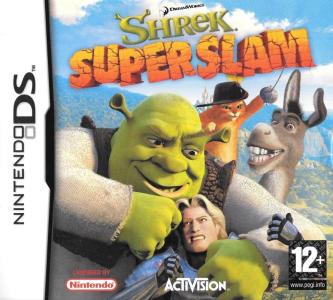 Shrek SuperSlam pits the characters from the Shrek franchise against each other in the only game that combines the twisted humor and pop culture parodies of the Shrek universe with the fast-paced action of a melee fighting game. Signature fighting moves like Shrek's Green Storm, Donkey's Juggle Punt, and Puss-in-Boots' Love-Stun bring variety and personality to the game. Fully destructible arenas like the Poison Apple Inn and Dragon's Gate have walls toppling and debris flying while a multitude of weapons, potions, and magical items spell endless melee action for up to four players.