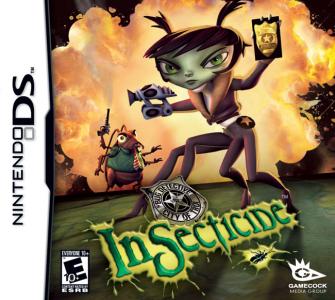 In the distant future insects have taken over as the dominant species of the planet. The hominds (humans), who have become deathly allergic to the new environment, inhabit the fringe of society getting by in makeshift hazmat suits in an attempt to prolong their survival. Chrys Liszt and Roachy Caruthers are detectives with the Insecticide division of the Troi Police Department. One night they are called in to investigate a murder at the Nectorola Soft Drink Company. After arriving they trace the cause of the murder to a low level arms dealer and follow him to a small diner down town. The suspect soon flees but is quickly captured by a squad of what appears to be robotic bugs. Chrys and Roachy are baffled but before having time to investigate further are called to escort Madame Quinbee, the CEO of Nectorola, on a train bound for the Nectorola's pollen fields to oversee the production of a new soda flavor. While on the train Chrys snoops around and stumbles upon a secret package. But before she can investigate further the train is ambushed by the same robotic bugs that had appeared earlier. Roachy and Quinbee are kidnapped and Chrys is seperate d from them when the train is separated.