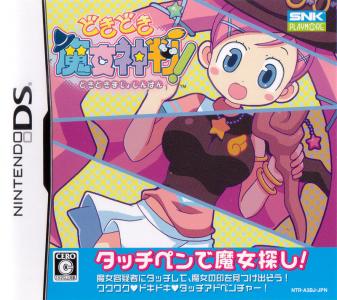 Doki Doki Majo Shinpan! (どきどき魔女神判!?, lit. "Thump-Thump Witch Judgement", or more accurately translated as "Heart-Pounding Magical Investigation") is a video game developed by SNK Playmore for Nintendo DS. The player assumes the role of a junior high school student who is asked by an angel to locate a witch that has sneaked into his school. In order to find the witch, he must search the suspects' bodies for a "witch mark." The preferred method is by using touch (using the stylus to guide his hands). A sequel titled Doki Doki Majo Shinpan 2 Duo was released 31 July 2008, and a third game titled Doki Majo Plus was released on July 30, 2009.