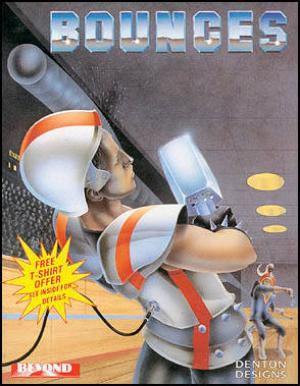 Bounces is a futuristic sports game. Two players (one of which can be computer-controlled), compete against each other in order to earn points. Each game consists of two halves of 90 seconds each, one from each side of the screen. The winner is simply the player with the most points at the end. There are two ways of earning points. The first is to catch the bouncing ball that bounces around the arena and throw it through the goal slots on the opponent's side of the screen. The further into the opponent's half of the screen the slot is, the more points it is worth, but the more difficult it is to get the ball into; particular as each player is attached to their side of the screen by a wire. The second way to earn points is to knock the other plater down, either with characters fists or with the ball. Being knocked down reduces stamina, as does straying too far into the other player's side of the screen or colliding with the wall each player is attached to. If either player runs out of stamina they are unresponsive until they recover.