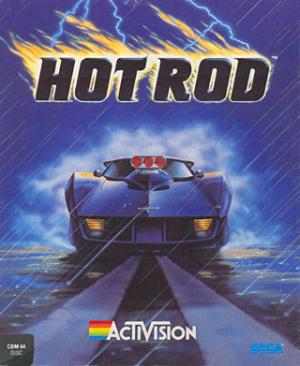 Hot Rod is a top-down arcade racing game developed by Sega. Released for arcades in 1988, the game was available in a four-player cocktail-style cabinet as well as a three-player upright cabinet. It was later ported and published in 1990 by Activision for the Amiga, ZX Spectrum, Amstrad CPC, Commodore 64 and Atari ST home computers. The player competes in races with three other cars. It is possible to upgrade the car at a Parts Shop. The concept of this game is fairly different from many other racing games. Every time a player falls off screen, they will be penalized by having gas subtracted from their gas meter. If the gas meter reaches "0", the game is over. The player can pick up flashing targets symbolized with a "G". By picking up the target, 20 units gas will be added to the player's gas meter. If the player successfully crosses the finish line, they will be rewarded additional units of gas. After every race, the player will then go to the Parts Shop. From there, with whatever money they have earned from races, they can purchase upgrades for their car. The types of upgrades include three front or rear engines, three types of bumpers, three types of spoilers, and two types of tires. However, the selection of tires is abundant, and include radial tires, speed tires, spike tires, and snow tires. The player may equip either a front or rear engine, not both at once. It is also impossible to have a spoiler and a rear engine equipped simultaneously.