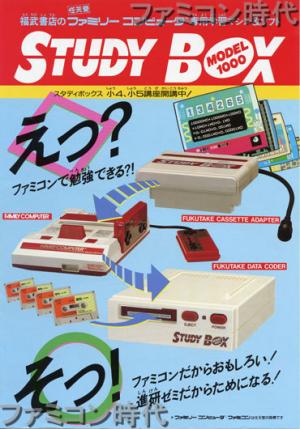 The StudyBox, released by Fukutake Publishing Co, Ltd., was much like a tape player for the Famicom. The accessory was small enough to fit on top of the Famicom, to plug into the connector. Also like a tape player, the top of the StudyBox would open to reveal the compartment where tapes were played. The StudyBox itself did not have the standard Play, Stop, Pause, Fast Forward and Rewind buttons on the system, as would be expected with a tape player. Instead, the student (presumably) would use the Famicom controller and on-screen cues to play the tapes. We don’t exactly know what the tapes would do. The purpose of the StudyBox was to make the Famicom more educational, giving students the ability to learn about whatever information was contained on the tapes. The tapes were, of course, only sound and voice, without visuals to accompany the studying.