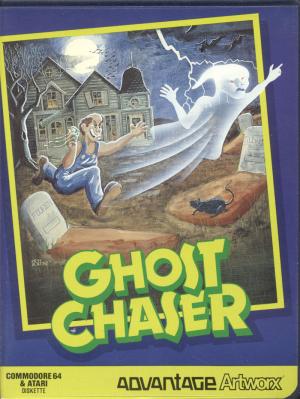 Harry the Ghost Chaser enters the haunted Fairport Manor and wants to drive out the ghosts that settle in that place. You control Harry on his mission. The game features sixteen screens that Harry must traverse: the attic, the kitchen, the library, the sewers and more. Ghosts roam the corridors and must be avoided or jumped over. The first few times Harry is touched by a ghost, he is not killed immediately, but merely immobilized from the shock. But further attacks from ghosts and also high falls may kill him. Thankfully Harry can defend himself and throw stones at some of the ghosts to kill them. The doors to the next rooms are often locked, so Harry must find keys to open them. The game can be played by one player or two players taking turns.