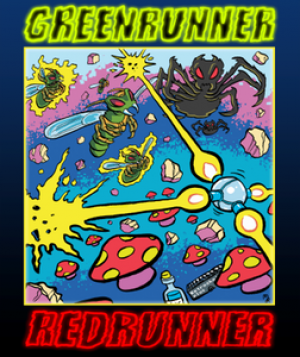 Released back in 2006 at the Game Over(view) Freestyle Jam, Greenrunner literally blew the competition away with its frantic arcade gameplay and amazing mix of sampled speech and high quality soundtrack. It's a game so hardcore and visually intense that it's probable that even Jeff Minter would beg for mercy at the thought of having to beat all 100 levels. One year on, the bugs are back, and this time they are in full colour! Improving on the high-res character based graphics of the original, 2007's Redrunner challenges the player with an all new and improved 100 waves of chaos. Lock 'n' load! In addition to the two games, the cartridge-exclusive Retroskoi Plus is a 2-oscillator monophonic synth for the Commodore 64. This enhanced Plus version comes with additional preset sounds and a wider keyboard range. In short, using Retroskoi+ and an audio connector you can rock up to a gig, plug in the C64 and cartridge and use your Commodore as a synthesizer or noise box - no monitor or other peripherals required! Greenrunner, Redrunner and Retroskoi+ have been updated since their initial release to ensure NTSC and PAL compatibility, and the game menu joystick control means that the two games are even playable on the Commodore 64 GS console.