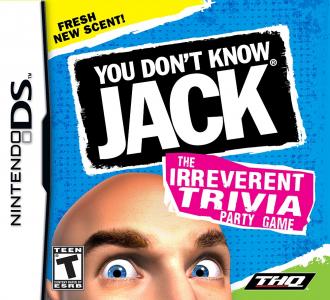 You Don't Know Jack (commonly abbreviated YDKJ) released in Japan as You Don't Know Jack Presented by Masatoshi Hamada (You Don't Know Jack Presented by 浜田雅功?), is a series of computer games developed by Jackbox Games (formerly known as Jellyvision Games[1]) and Berkeley Systems, as well as the title of the first game in the series. YDKJ, framed as a game show "where high culture and pop culture collide", combines trivia with comedy. While primarily a PC and Mac-based franchise with over two dozen releases and compilations for those platforms, there have been a few entries released for consoles: two for the original PlayStation, and the 2011 release which had versions on the Xbox 360, PlayStation 3, Nintendo DS and Wii. In 2012, Jackbox Games developed and published a social version of the game on Facebook[2] with cross-platform versions subsequently released for iOS,[3] Android[4] and Kindle. On November 5, 2013, the majority of the franchise’s many volumes and spinoffs were reissued onto Steam[5] by Jackbox Games.