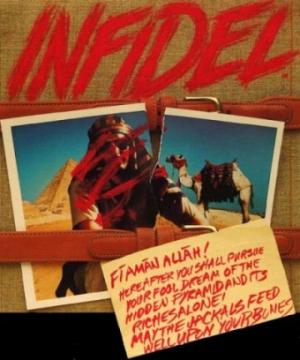 Infidel is an interactive fiction computer game published by Infocom in 1983. It was written by Patricia Fogleman and Michael Berlyn and was the first in the "Tales of Adventure" line. Due to Infocom's virtual Z-Machine, it was ported to a wide variety of popular computing systems of the day, including the Apple II and Commodore 64. It is Infocom's tenth game. In 1916, Dr. Ellington came into possession of a 5000-year-old fragment of pottery covered with hieroglyphics. (Conveniently for the text-only game, these runes look strangely like ASCII characters.) After years of painstaking research, Ellington managed to decipher a portion of the text, which indicated the general location of a pyramid that no one had heard of before. He managed to organize a modest expedition to the area in 1920, but found nothing before he died except a small block of limestone bearing the same style of hieroglyphics. According to the partial translation he made, the new fragment spoke of a queen and great riches. When Howard Carter discovered King Tut's tomb a few years later, Dr. Ellington's widow figured that someone had found the pyramid her husband had been looking for. She stowed the papers and artifacts away and forgot all about them. Rose found them in the early 1980s after her mother's death and did some preliminary fact-checking. The pyramid indicated by her father's papers is nowhere near Tut's. In fact, no pyramids have ever been discovered in the area Dr. Ellington was investigating. Rose is by no means a rich woman—she only wants someone to give her father the recognition he deserves—so it'll be a modest expedition. But it sure sounds like the perfect chance for an opportunistic soldier-of-fortune to make a name for himself.