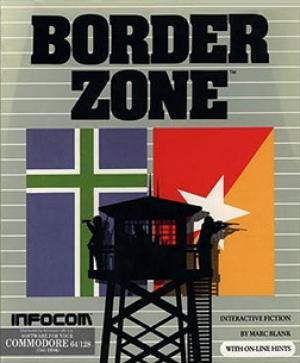 Border Zone is an interactive fiction video game written by Marc Blank and published by Infocom in 1987. It was released for MS-DOS, Apple II, Commodore 64, Amiga, Atari ST, and Macintosh. Unlike most other purely text-based games, Border Zone incorporates real-time aspects of gameplay. It is also Infocom's thirtieth game.[citation needed] Its tagline is "Action and international intrigue behind the iron curtain." Mirroring the real-world tension of the Cold War in the 1980s, Border Zone is set in and around Ostnitz, located on the border between the Eastern Bloc nation of Frobnia and neutral Litzenburg. The celebration of "Constitution Day" in Ostnitz will include a speech by Litzenburg's American ambassador; there is a plot in motion, however, to assassinate the ambassador in an effort to provoke hostilities between the superpowers. Border Zone consists of three chapters, each of which places the player in the role of a different character. An American businessman, a KGB agent, and an American spy become entangled in the assassination plot and efforts to either stop it or ensure its success. The tension is increased by the introduction of real-time events in the game. Unusually for a text adventure, game time continues to pass even as the computer waits for the player's next input. Certain actions, such as sneaking past a guard post, must be timed carefully to succeed.