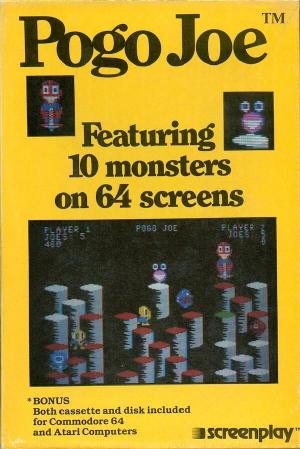 Pogo Joe is a computer game for the Commodore 64 and Atari 8-bit family, written by William F. Denman, Jr. and Oliver Steele. Michael Haire did the artwork, and Steven Baumrucker wrote the sound and music subroutines, designed and named the levels, and wrote the music. It was published by Screenplay in 1983. Pogo Joe is a Q*Bert clone with several extra features. The player takes the role of the eponymous Pogo Joe, a boy on a pogo stick. The game takes place over 65 different levels, each consisting of a different arrangement of barrels. To complete a level, Pogo Joe must jump on every barrel. To make Pogo Joe's job harder, several enemies inhabit the levels. They first start out as spherical "eggs" of different colours. Colliding with these "eggs" kills the enemy within them, but if left alone for a few seconds, the "eggs" hatch into different sorts of enemies, contact with which is fatal to Pogo Joe.