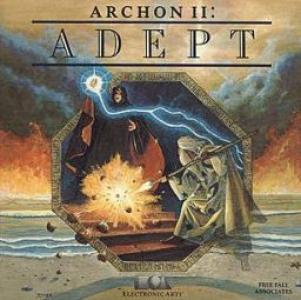 Archon 2 or also Adept is the successor of the successful Electronic Arts classic Archon. As already seen in Archon, an apocalyptic fight takes place in a fantasy surrounding, now not between "light" and "dark" but between "order" and "chaos". It all happens in a game area which is divided into 4 elemental layers. In the center is the earth layer, it is surrounded by the water layer and this is surrounded by the air layer. The outer layer is made of fire. Opposite to its forerunner the players start in Adept only with one magician ("Adept") per layer. All the other creatures have to be conjured in the course of the game. Evocations and other spells cost energy, which is renewed by occupying energy points on the game area with your own creatures. The more points you occupy, the more energy you get. Every side possesses 4 own elemental beings, which have a special force when they are on their corresponding layer. Moreover 4 different demons can be conjured from both sides, which can fight independently from the chosen element. Many of these creatures can use a shooting attack, but they have also lots of special attacks. When two figures meet on a field, here also the screen is zoomed and a fight for life and death starts. The winner claims the hard-fought field. Dependent on the layer you are fighting on, the battlefield has different obstacles such as slowing-down lakes, shoot destracting swirls, flame walls or simply walls ready. The only exception are the two void fields, here no terrain is used