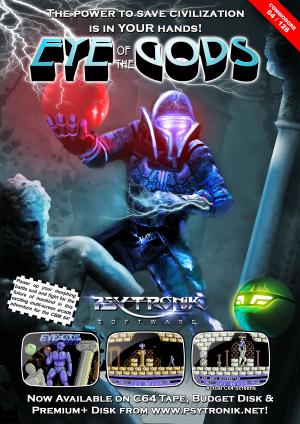 Eye of the Gods

In the distant future, Mankind has evolved technologically - but this development came at a price: The resources of the planet were gradually depleted to the point that civilization was left on the brink of collapse. Ancient legends tell that in the origins of civilization, in those times where history is confused with myth, humanity possessed an artifact of great power known as the Eye of the Gods. Some believe it is a mystical object that connects with other dimensions; others believe it is an inexhaustible source of energy. To calm the voices who plead for the artifact to be recovered, the Army sends one man, you, to infiltrate the ancient ruins of the Cradle of Civilization with one single purpose: Execute a desperate mission to find the Eye of the Gods, and to save humanity from it's own extinction. Features: • Huge map to explore! • Varies enemies to destroy or avoid! • Morphing power-suit with different powers! • Retro-style C64 visuals! Credits: David Rodriguez - Design / Programming / SFX Richard Bayliss - Music Jason 'Kenz' Mackenzie - Game Packaging Trevor 'Smila' Storey - Inlay Artwork