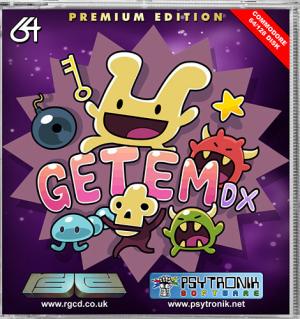 Poor Getty and Emma may well have been captured by the grumpy old troll King and locked away in the Nyarlu dungeons of infinity, but they weren't overly concerned. Regardless of their plight, the two happy critters cheerily snapped the neck of their prison guard while he slept and prepared for another daring escape. This wasn't the first time they'd thwarted the King's efforts - and it certainly wouldn't be the last... ...Having said that though, these dungeons were unlike any hell-hole the King had cast the duo into previously. Every floor of the neon-walled catacombs was radically different in layout, and what were these odd pulsating crosses lining the corridor floors? Whatever they were for, they certainly tasted nice! And wasn't it convenient that after scoffing them all a key and exit would appear leading to another dungeon? Wizard! Grabbing a crossbow each from a fallen troll, Getty and Emma skipped happily down the halls, filling their tummies with crosses and chirruping merrily as they let forth salvo after salvo of deadly bolts into the thick hides of their captors. Full of the spirit of adventure, the two friends felt super-positive about their chances - and even if they didn't make it out, nothing would stop them from having fun trying!