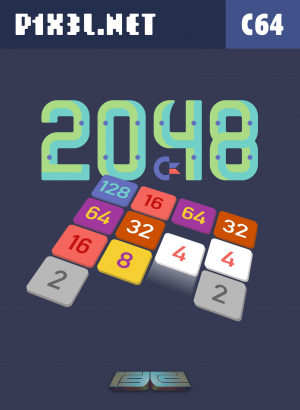 Slide the tiles around the board and collide identical numbers in order to climb up the power-of-two series until you achieve 2048. Each turn a new '2' or '4' stone will appear on the 4x4 grid, meaning that you'll have to choose your moves carefully. Every time you collide two or more tiles, your score increases by their merged value. Originally an entrant in RGCD's 2014 C64 16KB Cartridge Competition, this final commercial version of the game features further visual improvements and minor bug-fixes (such as same speed music played on PAL and NTSC systems).