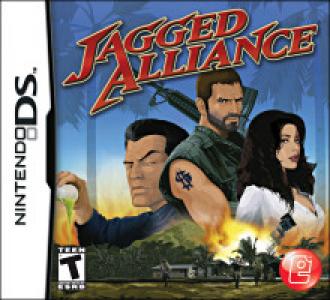 Jagged Alliance is an explosive fusion of role-playing game and turn-based tactical combat, allowing players to become fully immersed in their characters. A new generation of gamers is be charged with liberating the Island of Metavira through the nonlinear gameplay that made the 1994 original so popular amongst gamers. On 26 August 2008, Empire Interactive announced that a Nintendo DS version was in development by Strategy First Inc. and Cypron Studios. The game was originally announced for release on 17 February 2009, but was later pushed back to 5 May 2009 in America and 26 June 2009 in Europe. The game differs in many ways from the DOS version. Graphics have a smaller scale and a very different texture on the sector maps. There are completely new music tracks and improved cinematic cutscenes. Features removed include item repairs, item conditions, bandage points, moving backwards, door manipulation closeups and deadly eels in the water.