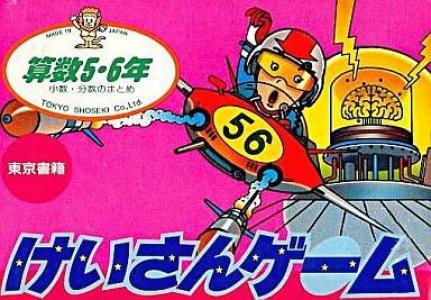 An educational math game for older Japanese students. The last in a series of five games released in 1986 by magazine giant Tokyo Shoseki. Keisan Game: Sansuu 5+6 Nen ("Calculation Game: Math Year Five+Six") is an educational game for the Nintendo Famicom and intended for middle-school Japanese schoolchildren. It includes two mini-games with variations on semi-complex arithmetic problems, such as fractions, decimals and long division. In each mini-game, the player simply has to locate the number or numbers which completes the sum/equation on the screen in order to proceed. The mini-game themes for this game include: a side-scrolling sci-fi shoot 'em up with top-down on-foot sections and an action game where a young girl tries to keep her garden free of bugs. The game was preceded by four Keisan Games with easier levels of difficulty, which were all released in the April of that year with the exception of Sansuu 4 Nen which was released the same day as Sansuu 5/6 Nen. None of the games were released outside of Japan.