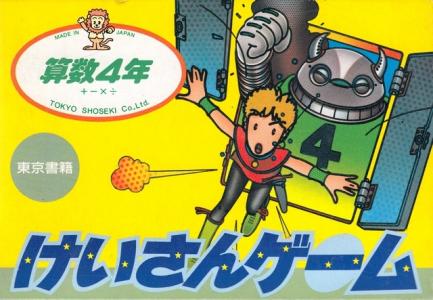 An educational math game for Japanese students. The fourth in a series of five games released in 1986 by magazine giant Tokyo Shoseki. Keisan Game: Sansuu 4 Nen ("Calculation Game: Math Year Four") is an educational game for the Nintendo Famicom and intended for middle school Japanese schoolchildren. It includes two mini-games with variations on semi-complex arithmetic problems, such as fractions and long division. In each mini-game, the player simply has to locate the number or numbers which completes the sum/equation on the screen in order to proceed. The mini-game themes for this game include: a horror-themed 2D side-scroller with top-down sections and a Rally-X-style maze game with cars. The game was preceded by three Keisan Games with easier levels of difficulty, which were all released in the April of that year. Sansuu 4 Nen was released the same day as Sansuu 5+6 Nen, the final game in the series, on the 30th of October. None of the games were released outside of Japan.