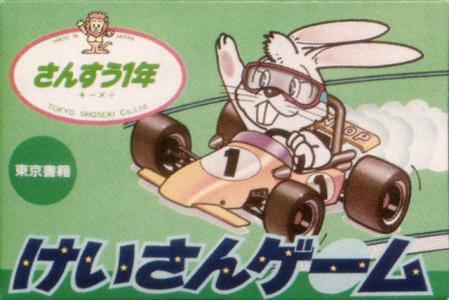 An educational math game for young Japanese students. The first in a series of five games released in 1986 by magazine giant Tokyo Shoseki. Keisan Game: Sansuu 1 Nen ("Calculation Game: Math Year One") is an educational game for the Nintendo Famicom and intended for the youngest year of Japanese schoolchildren. It includes four mini-games with basic arithmetic problems. In each mini-game, the player simply has to locate the number which completes the sum on the screen in order to proceed. The mini-game themes for this game include: a man catching bird eggs, a rabbit in a field, a man in the mouth of an enormous creature and a car driving down a road. The game was followed by four games, each offering progressively more difficult math problems. Sansuu 1 Nen was released the same day as Sansuu 2 Nen and Sansuu 3 Nen on the 25th of April, with Sansuu 4 Nen and Sansuu 5+6 Nen released later the same year on October. None of the games were released outside of Japan.