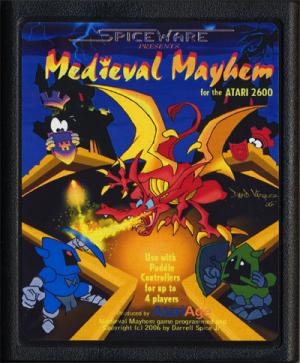 Fans of the popular four-player Atari 2600 game Warlords (itself based on an arcade game of the same name) will be happy to learn that 2600 enthusiast Darrell Spice Jr. has created a new 2600 homebrew titled Medieval Mayhem, an updated take on Warlords. While the original version from Atari is still a blast to play, Medieval Mayhem adds arcade features such as the launch dragon, multiple fireballs and a level of polish missing from the original 2600 release. It also includes a menu to select options before starting the game. Medieval Mayhem is a frenetic multi-player game that you can enjoy against your friends (up to four people may play) or against the computer AI!