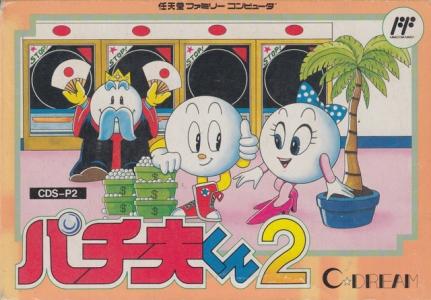 The second NES Pachio-kun game, about a sentient pachinko ball that loves playing pachinko. It was published by Coconuts Japan. Pachiokun 2 is the sequel to Pachiokun, and was also published by slot machine manufacturer Coconuts Japan as well as developed by contract developers Marionette and C Dream. As with the first game, the goal is to help a sentient pachinko ball named Pachio-kun bankrupt a series of pachinko parlors and liberate all his miniature brethren from their flashy mechanical gulags. The game introduces Pachio-kun's wife, presumably named Pachio-chan. If she's upset about her husband's gambling addiction, she never shows it.