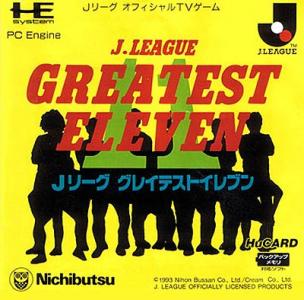 Soccer game released in 1993 for the PC Engine. J-League Greatest Eleven is a soccer game for the PC Engine published by Nichibutsu/Nihon Bussan. Despite the similar name, it has no relation to Konami's J-League Winning Eleven series. The game features the Japanese soccer league's ten teams from its inaugural 1993 season. There's an exhibition mode with support for four players and a league mode where 1 or 2 players can face off against the computer. The game also offers an option to play with four human players, but only in the exhibition mode.