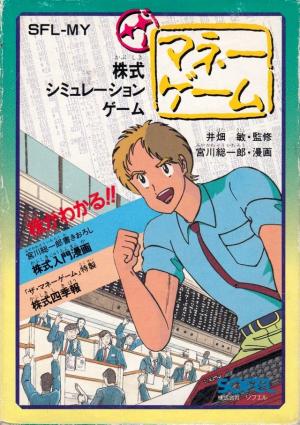 A Stock Market/life-sim game where the player must manage their stocks in order to achieve a happy life. It was developed by SOFEL for the NES and released in Japan only. The Money Game is a stock market simulation game where the goal is to raise money through the wise purchasing and selling of various types of stock. Coupled to this is a life-sim aspect where raising a sufficient amount of money at certain checkpoints allows the player to gain and keep a girlfriend, who later becomes their wife and provides children. As well, the player can upgrade from their initial studio apartment to a terraced house to a mansion with its own Olympic-sized swimming pool. The game is densely packed with Japanese script and requires both literacy in that language and a fairly good understanding of dealing in the stock market itself (though the game does provide tutorials for the latter). It would be followed by a sequel, The Money Game 2: Kabutochou no Kiseki, which in turn would be the basis for SOFEL's Wall Street Kid.