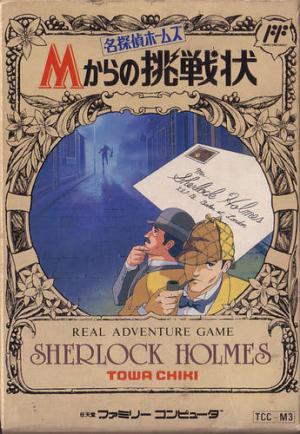 The third of three NES Sherlock Holmes adventure games from Towa Chiki and Another. M-Kara no Chousenjou is the third in Another/Towa Chiki's series of adventure games for the Famicom that star Sir Arthur Conan Doyle's famous sleuth, Sherlock Holmes. It follows Sherlock Holmes: Hakushaku Reijou Yuukai Jiken and Meitantei Holmes: Kiri no London Satsujin Jiken. As with the second of those games, M-Kara no Chousenjou has the player navigate a menu to talk to NPCs and witnesses, investigate areas of interest, find and pick up evidence and walk to various locations across Victorian-era London and other cities.