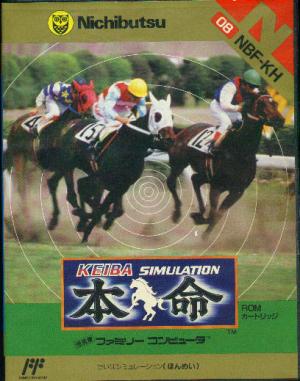 A horse racing simulation game from Nichibutsu, developed for the NES in Japan only. Keiba Simulation: Honmei ("keiba" is the Japanese word for horse-racing, and "honmei" is a term meaning a favorite to win) is a Famicom horse-racing simulation game from Nichibutsu, often known as Nihon Bussan. In fact, the box art states the former as developer and the title screen states the latter. As a true simulation game, there is no racing (at least that the player can control) or gambling. The player instead can fiddle with the parameters for each race and the horses competing, changing their stats such as fatigue, age and the weight of the jockey. Then players can watch a race with these settings play out and observe the winner. It is possible the goal of this game is to recreate the likely output of an actual race based on as much information as the player is able to muster in order to assist them with their gambling, though its more likely the game is for racing enthusiasts.