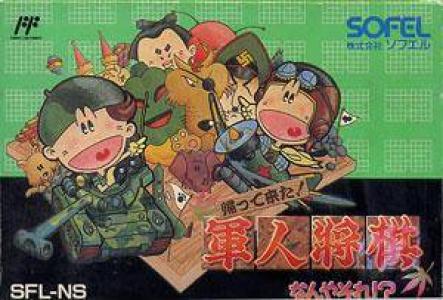 A shogi game with a comedic military theme, released by Sofel for the NES in Japan only. Kaettekita! Gunjin Shogi: Nanya Sore!? is a shogi game that uses the gunjin shogi, or military shogi, variant of the classic eastern chess-like board game. The player starts by selecting one of five opponents: A pumpkin-headed ghost, a werewolf Al Capone, an alien, Adolf Hitler or a sumo wrestler. The player is then given an assortment of pieces while the opponent appears to have the same number of instances of the same piece, though in truth their real forms are concealed from the human player. The player must use their wits to defeat the enemy's force of shogi pieces, which have different themes depending on the opponent the player has chosen (for instance, when fighting the pumpkin ghost both sides have vegetable-themed pieces). When one of the player's pieces and an opponent's piece occupy the same space, a battle ensues: Some pieces will always win against other types, sort of like the rock-paper-scissors aspect of strategy games like Fire Emblem. If neither of the two pieces are weak to the other, both are eliminated. The goal is to figure out what pieces the opponent is attacking with and take them out - sometimes it is possible to ascertain what piece it is with how many spaces it can move, but the most reliable method is to see which pieces it is able to defeat, recalling its place on the rock-scissors-paper chain and then using a piece strong against it to finish it off. The game, like all shogi simulators, was never released outside of Japan.