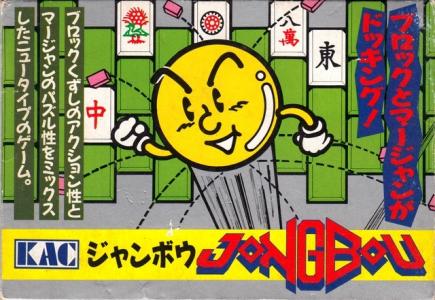 Jongbou is a hybrid Mahjongg/block-breaking game developed by SNK and Micronics and released in Japan only for the Nintendo Famicom. Jongbou is a combination of the popular Chinese board game Mahjong and a block-breaking game such as Breakout. Players bounce a ball around a Mahjong table filled with concealed tiles, with their goal being to dislodge the tiles and collect the ones they wish to add to their hand by passing underneath them as they fall. The stage is over either after all the tiles have fallen or the player has a winning hand. The block-breaking aspect is simple: Simply direct the bouncing ball by hitting it with the paddle to first destroy the wall of betting tokens before reaching the hidden tiles. Hitting a tile once reveals it, allowing the player to strategically direct the ball so that they can collect the tile (if desired) and still catch the ball before it leaves the screen. In addition, there are various power-ups that are mingled with the tiles. These have different characters than the dragons/seasons/flowers and provide different benefits, such as a partial wall to block the ball, forcefields that slow it down and special tiles that reveal all the remaining hidden tiles. It should be noted that as useful as a tile might be towards obtaining a winning hand, it is not worth losing the ball (and subsequently a life) over. Mahjong can seem a little convoluted, but it plays essentially like the card game rummy: The goal is to collect and discard tiles until the player has a hand that is comprised of Chows (straights of three, worth nothing but easier to obtain), Pungs (three-of-a-kind) and Kongs (four-of-a-kind, worth more than Pungs). The player normally has thirteen tiles in a hand, though this becomes fourteen tiles when they're in the process of discarding one. If those fourteen tiles comprise of Chows, Pungs and Kongs (and one pair) then it is a winning hand and the holder can declare Mahjong to win the round. For the purposes of this game, much of the game's rules are unnecessary, including betting or indeed any of the multiplayer aspects. The goal is to simply put together a winning hand by collecting the right tiles as they drop. Tiles can range from "Characters" (a black symbol over a red symbol, actually Chinese numerical symbols for thousands), "Bamboo" (green sticks) and "Wheels" (black and red circles), as well as the three dragons (the red and green characters and the blank white tiles), the four seasons and four flowers. With the exception of the seasons and flowers, players need three (or four) instances of the same tile to score points.