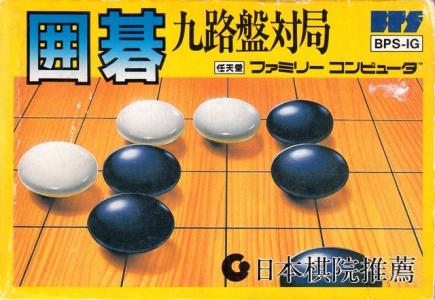 A Japan-only Go game developed and published by Bullet-Proof Software for the Famicom Disk System. Igo: Kyuu Roban Taikyoku ("Go: 9 Row Grid Boardgame") is a Go video game that was originally released for the Famicom Disk System on August 11, 1987 in Japan. It was the first Famicom game developed by Bullet-Proof Software: a development studio operating out of Hawaii that would later be responsible for Nintendo's version of Tetris, among other games. This version of Go is better suited for beginners, as it contains simpler 9x9 grids rather than the regulation 19x19. Igo: Kyuu Roban Taikyoku has a credit for Edge Computing on its title screen; it is assumed some of the game's coding was taken from Edge's C64 game Micro Go.