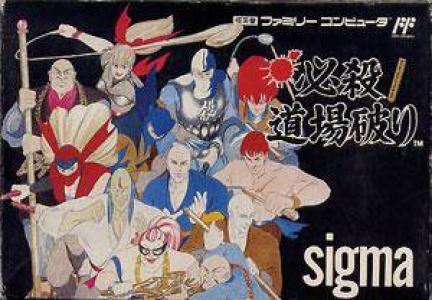 An RPG/Fighter hybrid developed and published by Sigma for the Famicom. It was never released outside of Japan. Hissatsu Doujou Yaburi is an RPG where players fight opponents in Yie Ar Kung-Fu style martial arts battles. The player needs to train for tournaments by encountering and defeating various foes, gaining XP all the while. When strong enough, they can fight a group of enemies one after the other in the tournaments that take place in towns. The player can also walk around towns interacting with friendly NPCs. This was Sigma Ent Inc.'s first Famicom game: Previously, they had only worked on Arcade games.