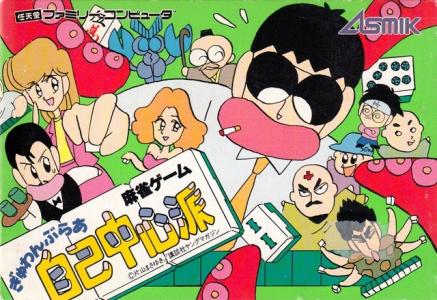 A Mahjong game based on a manga license, published by Asmik for the NES and MSX in Japan only. Gambler Jiko Chuushinha is a mahjong gambling game based on a manga with the same name. As such, it has a large cast of characters from the comics that the player can choose to compete against. Beyond the manga license, it is very much still a mahjong game, focusing mostly on playing the tile-based board game, though using a difficult variation on the usual rules of the game. Gambler Jiko Chuushinha was notable for having several developers working on the project including Bits Lab, Yellow Horn and Game Arts. It would also receive many sequels that play more or less the same, including one for the Sega Saturn (which included anime cutscenes - a first for the license as it was never adapted into an anime).