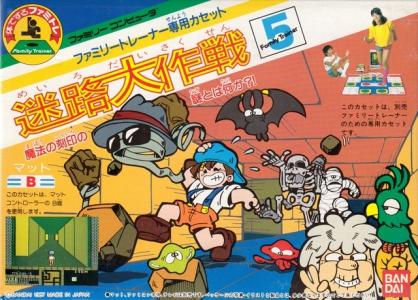 A Famicom game developed by Bandai as part of their Family Trainer series, which all use the Family Trainer (Power Pad) accessory. The goal is to explore mazes. The fifth in Bandai's series of Family Trainer games, created for the accessory with the same name (or Power Pad in the US). Unlike the others, which tended to be athletics/exercise games, Meiro Daisakusen ("Epic Maze Battle") is a maze-exploring light RPG where the goal is to walk and jump around mazes to find items and, eventually, the exit. The game's controls are dictated entirely by the Family Trainer/Power Pad. Different buttons will either cause the protagonist to jump, walk forward, walk backwards, turn left or right or switch their position to the left, right or center of the screen. While searching for the exit, players must be mindful of the various enemies that also inhabit the mazes, most of which must be avoided by jumping over them or running past them.