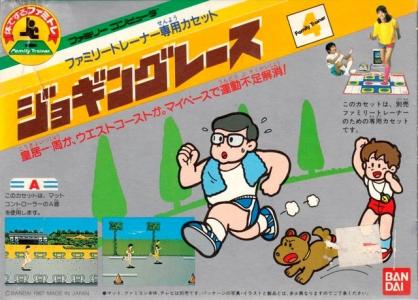 An exercise game created for the Family Trainer (the Japanese name for the NES Power Pad) developed by Human and published by Bandai. Jogging Race is the fourth game created by Bandai for the Family Trainer (US: Power Pad) accessory for Famicom systems. It was one of the many games that used the peripheral that did not see a release outside of Japan. As with other Family Trainer games, the emphasis was on receiving a work out using the Famicom, a conceit that would later find greater success with the Nintendo Wii and the Wii Fit games. Specifically, Jogging Race is about jogging through areas of a simulated Tokyo using the pad to simulate the exercise. The background scrolls by slowly, accurately matching the scale of the distances found in the real location, and will occasionally include additional details like other joggers. There is also a second mode named Marathon, in which the player competes in a long distance race with other CPU runners.