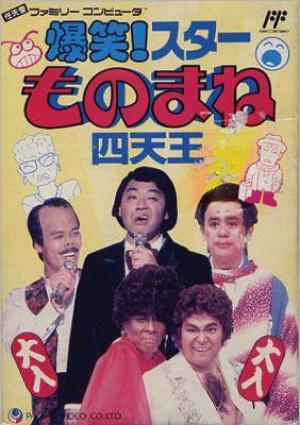 Bakushō! Star Monomane Shitennō (爆笑! スターものまね四天王?, "A Hearty Laugh! Imitation of the Four Heavenly Kings Star") is a Nintendo Family Computer life simulation video game that portrays the life of either a musician or a famous performer of the monomane (模倣?, "imitation") style of Japanese theatre. The object is to earn popularity while performing concert tours through the fictional city. Celebrity challenges are included in the game; they are considered to be miniature games like swimming and kicking a giant ball into a goal in a manner similar to soccer. While these games are fun to play, losing results in a loss of popularity points similar to performing terribly at a concert. Appeasing senior citizens by performing gigs at the nursing home is another way to gain popularity. Otherwise, they will criticize the player's music or theatre styles without an end. After gaining the respect of the elderly, the mad faces eventually turn into frowns (and eventually smiles). Television appearances come in the form of talent shows, televised concerts, and several other surprises. The eventual goal is to convert all stadiums and concert venues to the player's colors. In addition to popularity meters for the players, music styles have their own popularity meters. Smiles with the player's colors determine which music styles are best liked by the player's fans. This determine what music or theatre styles to play and which ones to avoid in certain concert venues. In the talent contest, the show is like a tournament where four people compete in a semi-final format. After the judges give their score, the two players with the lowest score are eliminated. The players with the highest score end up competing in a final round where the highest scoring player is the winner and receives popularity points. During the actual performance, the player must choose his or her musical style(s) and must improvise the lyrics. During a televised concert, the game proceeds like in a normal concert. The only difference is that an increased number of popularity points are rewarded for a successful concert. When the player draws a certain combination on the dice, he or she must go to a nursing home and impress a grandmother with his or her musical or theatre styles. If the player can impress the grandmother with his or her music, then the player is accepted more by the elderly people. However, the elderly people can get grumpy again if the player manages to make the grandmother angry each time that the player has to perform at the nursing home again. All the text in the game is in Japanese. Other combinations of the letter and number dice can create or ruin a player's popularity along with other side effects. The dice combination "A-1" is the best combination and it causes a rapid rise in popularity, which means more fans show up to the lucky person's concerts. Getting an "F-5" is the worst combination and will result in a loss of popularity. However, all other combinations can have either negative, neutral, or positive results for the player. Guessing about the result of the dice throw is all the fun of trying to get popularity for the band and greater appreciation from different age groups.