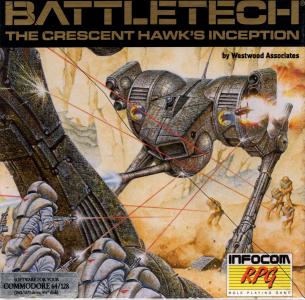 Jason Youngblood is a young cadet MechWarrior stationed on the Citadel of Pacifica in the Lyran Commonwealth. Jason is training hard to become a battle mech pilot, following his renowned father Jeremiah. One day, the Citadel is attacked by the forces of the Draconis Combine from a neighboring star system. Barely escaping, Jason teams up with a member of Crescent Hawks, a special unit established by Jeremiah. Together, they must find the other members, ready to face the new threat. This will be harder for Jason than for anyone else, for he is sure that his father was among the attackers... BattleTech: The Crescent Hawk's Inception is a role-playing game based on the BattleTech franchise. The first part of the game is spent training in the Citadel, acquiring the game's currency and experience, and learning how to fight in battle mechs or on foot, using smaller weapons. Afterwards, the game follows a more traditional RPG structure: Jason explores Pacifica, visiting its cities, recruiting companions, and fighting enemies in turn-based combat.