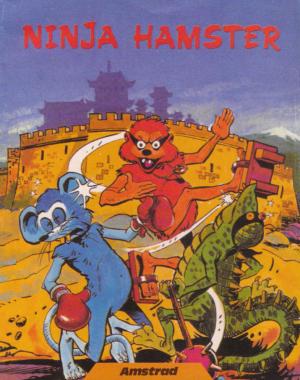 After a long journey over the seas, Ninja Hamster has come home to find his village being terrorised by a gang lead by Sinister Rat and The Lizard of Death. In this beat-em-up you must fight six members of the gang as well as the two leaders, one by one to save your village. The game is viewed from the side with the whole level shown on the screen. With a joystick or keyboard you use the fire button and a direction of the joystick/keyboard to pull off various kicks to hurt your opponent. Each fighter has a energy bar and an apple and when either is hit then their bar decreases but the bar will keep increasing when not hit. Once the bar is empty then the losing fighter is knocked down and part of his apple is removed. The winner of the fight is the fighter who removes the whole of his opponents apple. If you win then you move on to the next fighter. There is a two player option where the two players fight each other but both have two apples.